WHY DO YOU NEED TO WORK ON PSYCHOSOMATIC BLOCKS

WHY DO YOU NEED TO WORK ON PSYCHOSOMATIC BLOCKS ⁉️ 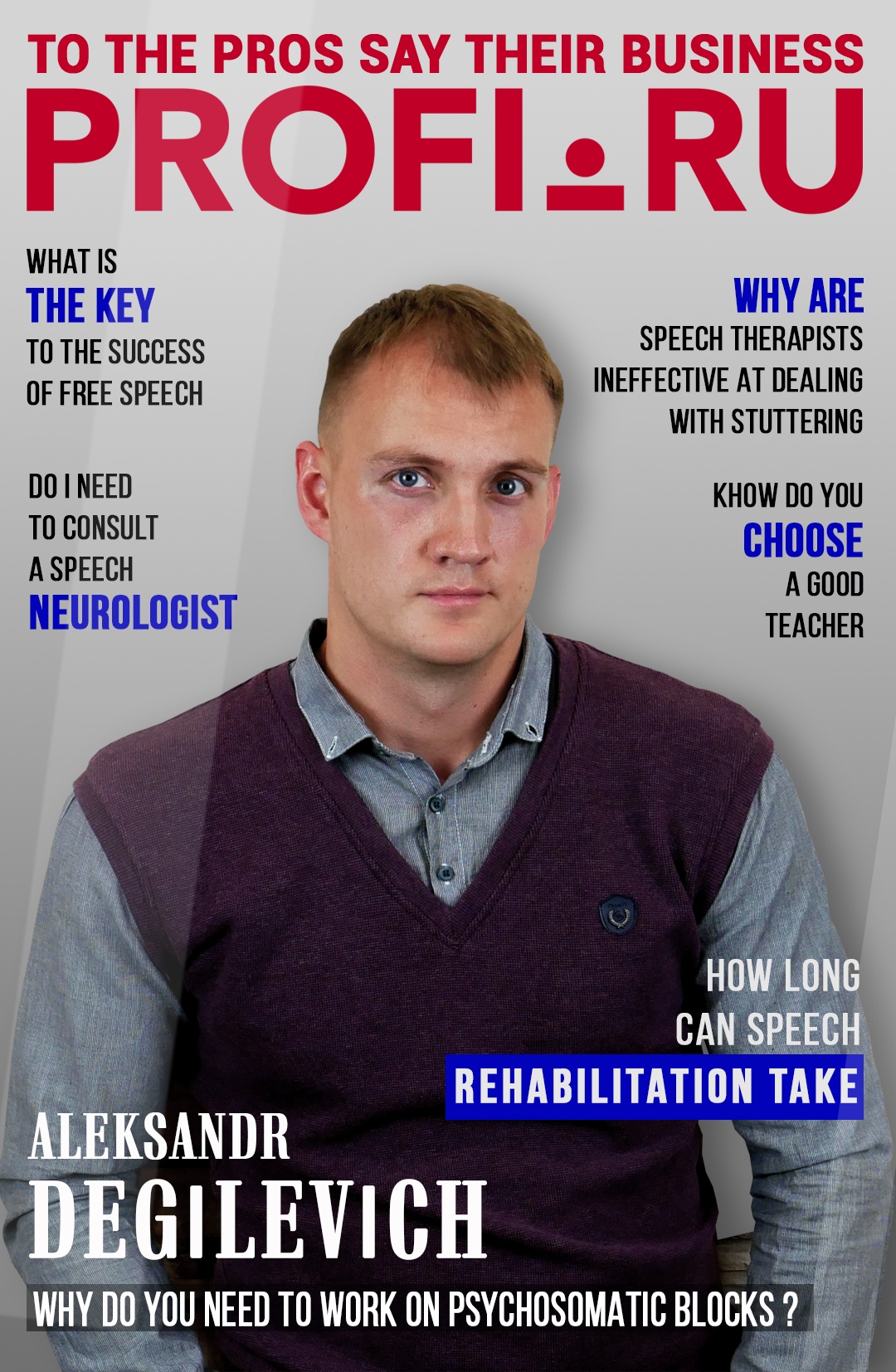 What is the problem of stuttering ? ?

Stuttering is a problem caused by psychological factors. That is why this neurotic disorder can be classified as a psychosomatic problem. And this disorder does not manifest itself in all situations, but only in conditionally stressful situations. So, for example, when speaking to himself or some close people stutterer can normally speak, and when communicating with another person severe stupors and grimaces appear 😬 . It is worth noting that in contrast to mental disorders, when people are neurotic, they are critical of their disorders and are able to direct their actions (on which a syllabus of rehabilitation in speech normalization basee). No matter how bad stuttering is, at any point in time a person can (!) stop and shut up without going any further to extract information  ✋ It is the stutterer’s own misdeeds that are leading to stupor conditions  🤐 . And, as a rule, these actions have already been worked out at a reflex level, in view of the speech stupors/blocks often repeated earlier. Everything is natural, as well as the story of the “occurrence” of stuttering. The child went through some stress and after that he had to speak to someone. Even before the answer, an unfavorable picture appeared in his head (for example, the dog that barked at him), and because of the experienced emotions, it was difficult for him to speak, and he began to stammer. Yeah, well, at first he hadn’t been making speech stupors, but he was repeating sounds and syllables and words, because of this conflict of imagination. So he started sticking his neck out, and then, looking at all the people around him, he started trying to talk like them, trying to help himself not to stumble or repeat. How was he trying to help? Right, by force! By the strength of his own muscles !   💪 🤦‍♂️ 🧏‍♂️By the strength of his facial muscles (and not only them, as practice has shown, some stutterers can also tense their neck, legs, hands and particularly,abs).In fact, the stuttering man began to make speech stupors himself, with a specific, concrete and understandable purpose – to help himself to make speech normal. And then it has got worse. Well, he wanted it to be better, and he did it the other way around ☹ Trying to help himself talk by force led to speech stumps. Some people try harder, some people try less. That’s why the stuttering level can be different. There are a lot of moments and comments about the origin of the «hearth» of the problem and its step-by-step fixation by the stutterers themselves, in view of the elementary impotence and lack of alternative solutions to the given tasks. Speech tasks. This is discussed in details in the session aimed at overcoming stuttering.

So, stuttering is a psychosomatic problem. Psychosomatics (other Greek: ψυχή – soul and σῶμα – body). Yes, the problem carries psychological roots, but it manifests itself through the body (through the clamps at the level of the diaphragm, larynx and speech apparatus). And these clamps do not “fall off” on us for no reason, they are caused by specific reactions to certain stimuli. At the same time, these irritants are conditional, for example, it is difficult for a stutterer to speak with a certain person. At the same time, during the conversation of the same person with other people, none of the interlocutors have a feeling of irritation … Yes, and the most stuttering “irritation” as a rule arises not to the person himself, but to the fact that you can stutter in front of him, he will have to observe this unpleasant picture, and you will be ashamed of it. And this fear is completely justified and logical. This is what all stutterers have fears 🤚They are not afraid of people. They are afraid of the consequences after their speech actions. This is the root of fear. And the actions after which these consequences occur are already taking place at the level of the body, in the form of clamps at various levels and attempts to counteract these clamps. It is these attempts that lead to the emergence of speech blocks, or rather, bringing himself to them. Just not to be silent … crooked, askew, somehow … but to convey information!
After all, if you just shut up in mid-sentence and refuse to speak further, it will look extremely ridiculous. And people are already listening, the attention is on you … this rush appears from here, the desire to “break up” as soon as possible. As a result, a person tries to say a word in an instant, that is, to perform several actions in one instant. But this is unreal 🧐🚫 Do not confuse the moment with the second! Two words can be said in a second! This is already an extensive topic in the sequence of extraction of phonetic units. This topic, as well as decisions to normalize this process, we are analyzing in detail in the classroom ✍ 👨‍💻 At first glance, this may seem simple to someone, in fact, there are many nuances and only systematic correct development of problem areas can contribute to the maximum elimination of stuttering  😊  All this is being worked out under the supervision of a specialist, with regular verification of the acquired material and operational adjustment of the educational process
Adjustments are done for:
● Amount of learned information
● Effectiveness of the exercises
● The level of awareness of the trainees in relation to the material processing
● Level of resistance of the organism due to interference caused by panic attacks and etc.

Well, let’s stay out of this way, cause that’s not what this article’s about..
Everyone knows that the cause of stuttering is stress, which originates in a distant childhood. Even if a stuttering person in adulthood does not consider his stuttering to be a stressful factor, this aberration, purely on a subconscious level, does not go unnoticed. You can convince yourself a thousand times that everything’s okay, it’s not a problem at all, it’s just that you’re special… but it doesn’t rule out your true negativity to this problem. And there’s no luck in going to the doctors, taking a handful of pills, and it’s not going to work ❌, because the cause of the problem is conscious. Very often psychosomatic disorders are not caused in the body but in the mind of the person. As with stuttering, speech stupor is the result of cognitive rather than physiological processes. Treatment can reduce the severity of the symptom, but it does not solve the problem. It’s not really easy, because solving the problem requires, among other things, removing the psycho-emotional block, the deep-seated connection between the body and the mind. And it’s impossible to do this with common, pharmacological methods.
For this reason, the program “Removal of psychosomatic blocks” adapted for getting rid of stuttering was added to the “BREAKTHROUGH” programm. It works at the frequency of communication between the body and consciousness, removes the blocks present in the mind and reformat the rooted connections ✅ And yes, this is not an easy task. Not a walk along the seashore. When practicing psychosomatic blocks it can be painful, unpleasant, uncomfortable, etc. But psychological pain points to the area of development … Having figured out the cause of psychosomatic disorders and having worked them “from and to,” you get rid of the consequences. The reason is the previous repeated negative experience tied to unwanted responses in various situations. Integrated testing of psychosomatic blocks with multiple desirable (normal) responses helps the stutter to adapt better to stably normal speech 🗽👌

The training course consists of 8 lessons, with a total duration of 13 hours
Passes over 2 weeks. The first 4 lessons – 2 hours each, the 5th – 1.5 hours, the 6th – 1.5 hours, the 7th – 1 hour, the 8th – 1 hour. As a result, over 2 weeks a hard work to overcome stuttering is happening, with prompt and regular feedback, analysis of “difficult” situations, tracking the correct completion of homework

Educational course (full) consists of 15 lessons, with a total duration over 20 hours.
The course lasts for 2 months. First 5 days lessons are – 2 hours long, then 5 lesson 1.5 hour and 5 lessons 1 hour long. As a result, over the course of 2 months a hard work to overcome stuttering is going to be done, with prompt and regular feedback, analysis of “difficult” situations, monitoring the correct completion of homework

With the help of express course, students are able to significantly improve their speech when communicating with someone. This is confirmed by many years of experience. Some of them, after only 4 days of training, felt that they practically got rid of this problem, since the speech process itself became something very simple and ordinary for them. And further improvement of speech and a decrease of fears is a matter of independent, but pleasant practice, during which:
– you are not afraid of mistakes in the form of speech stupors and repetitions, but you look at them with interest and skillfully cope with them
– you know exactly in which direction you should work in order to think only about the subject of speech in the process of communication with so
– during the course you will realize on a sensual (!) level that your speech depends only on yourself, and you would have already experienced in practice the benefits of the problem areas being worked out by the Breakthrough system
– when you feel that you no longer need to try to squeeze out sounds forcefully, to help yourself with facial muscles, long stops, uncomfortable sharp acceleration and strange slowing down of speech …
All this becomes unnecessary when we open you solutions for the complete rehabilitation of speech and control comprehensibility of educational material “from A to Z”.

The express course opens up a new world for you. The world of free communication and normal attitude to your own speech.

In just 4 days, it is impossible to get rid of stuttering completely, but you can understand what is needed for this and begin to move effectively in this direction.